Internet of Things in everyday life

Over the years there has been a rapid growth in the domain of Internet of Things (IoT) in terms of technology as well as market growth. The networking of computers called as “Internet” revolutionized the way we share the information. The IoT can be considered as next revolution in how we perceive and share the information (Virat, 2018). In the box below you can access a simplified definition of IoT:

As we have seen before, the IoT is a broad term used to refer to the vast network of internet connected devices that exist today.

The Internet of Things promises to be the most important technological development for consumers since the advent of the smartphone. Experts believe that this technology will eventually generate more than $123 billion in annual revenue by 2021 and the statistics point out that there will be more than 36 billion devices connected to the internet by the end of 2020.

Because of that, we can easily recognize that the overall society will be in touch with an IoT device at a certain point. Therefore, it is very important to improve the overall behaviour of citizens and their privacy/security.

The dynamics, intelligence and mobility of IoT make it a high demand technology but also make the IoT vulnerable and risky under security and privacy terms. To understand the complexity of this challenge, you need to comprehend the basic architecture of IoT, characterized by a dynamic structure. The number of layers that composes the architecture of IoT diverges immensely between experts, but all of them agree that IoT is composed by at least four layers: Perception, Network, Processing and Application. 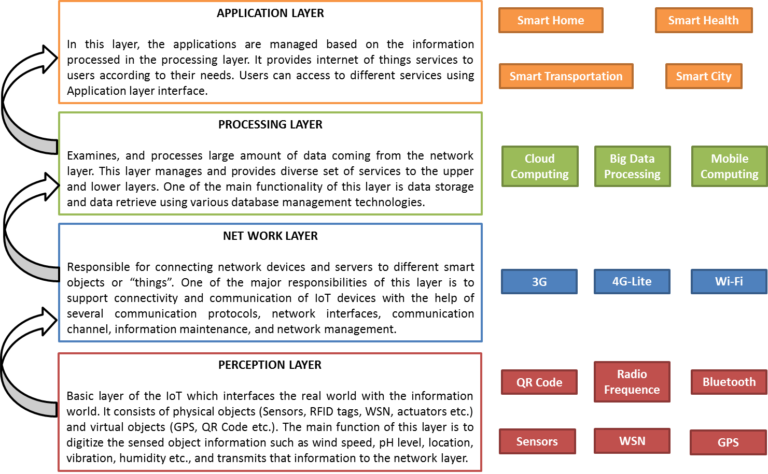 As you can notice, the Application Layer facilitates the global management of the smart applications and provides specific services to the user. In the next table the Top Applications of IoT in day-to-day life are presented: